Growing up with Swedish au pairs

Having an au pair lays the groundwork for global citizenship in host children.

For American children, having an au pair as a caregiver is similar in many ways to learning a second language – the exposure to another culture at a young age fosters a sense of worldly curiosity, inspires global citizenship down the road and gives children perspective that truly anything is possible.

Host families benefit from welcoming au pairs into their home and their hearts in countless ways, but perhaps one of the greatest is that an au pair lays the groundwork for host children to travel, learn and seek out cultural exchange later on in life.

Take it from former host child Carly DeCoste of Hingham, MA. She and her sisters grew up with seven au pairs from the time Carly and her twin sister Sammy were only 1 month old, until they were 8 years old. Her older sister Leah was 9 when they said goodbye to their final au pair.

“My mom was working full-time as a doctor, and my dad full-time as a banker,” says Carly. “My sister Leah was born only about a year before my twin sister Sammy and me – so they had 3 babies within 13 months. It was a whirlwind for them.”

Before Carly and Sammy were born, their parents thought about trying to do it all themselves – to juggle demanding careers and a demanding home life – but they just didn’t have the time or flexibility with their jobs to stay home or split childcare duties. So when they were desperate for an extra pair of helping hands, they turned to a friend who worked for Cultural Care Au Pair as a Local Childcare Consultant. She helped the DeCostes welcome their first au pair – and from there, they never looked back.

“Back then, in 1993, Massachusetts was one of the biggest destinations for au pairs in the USA. So there were already a few au pairs living with local families in town that helped my parents warm up to the idea,” says Carly. “My parents said that from day one, our au pair was a game-changer.”

Carly is in a unique position to reflect on the long-term impact of her au pairs growing up – after all, she now works as Email Marketing Manager in Cultural Care’s Cambridge office. She welcomed the chance to work for the company that introduced cultural exchange into her life, and reveled in the opportunity to immerse herself in the au pair program in a new way. Most of all, Carly attributes her wanderlust and love for global citizenship to her childhood au pairs.

“At an early age, I understood and had an appreciation for other cultures,” says Carly. “By the time I reached high school, I knew I wanted to have a cultural exchange experience in college.”

She went on to study abroad in Spain her first semester at Colby College – a brave first step for an incoming freshman. Her sister Sammy spent a full year abroad in Scotland – and all three sisters have in recent years embarked on mission trips to both Haiti and Jamaica.

“It wasn’t scary for us to go abroad. We were all excited about the opportunities to travel and meet new people – and we weren’t at all nervous about the language barrier,” says Carly. “I know it’s because of the cultural experiences I had growing up with my family and au pairs.”

Over the years, the DeCostes hosted seven au pairs – four from Sweden, one from Denmark, one from Switzerland and one from Great Britain. When Carly was just 5 years old, she formed her first real memory of her Swedish au pair Susanne.

“I remember Susanne was leaving, and my parents were telling us that another au pair was coming soon,” says Carly. “During those transitions, my mom and dad would organize a special send-off for the au pair – a nice dinner with them, signs and gifts to say farewell. And then we’d all chip in to make welcome signs for the new au pair, as a way to make the transition easier.”

Carly’s parents thought it was important that the current au pair helped them choose the next au pair for the family – because after all, who knows the ins and outs of the au pair role better than them? They knew how to talk to potential au pairs, and how to explain the household routine and dynamic. They’d keep a special eye out for au pairs who were interested in both skiing and swimming, as all three girls were active in their young age. 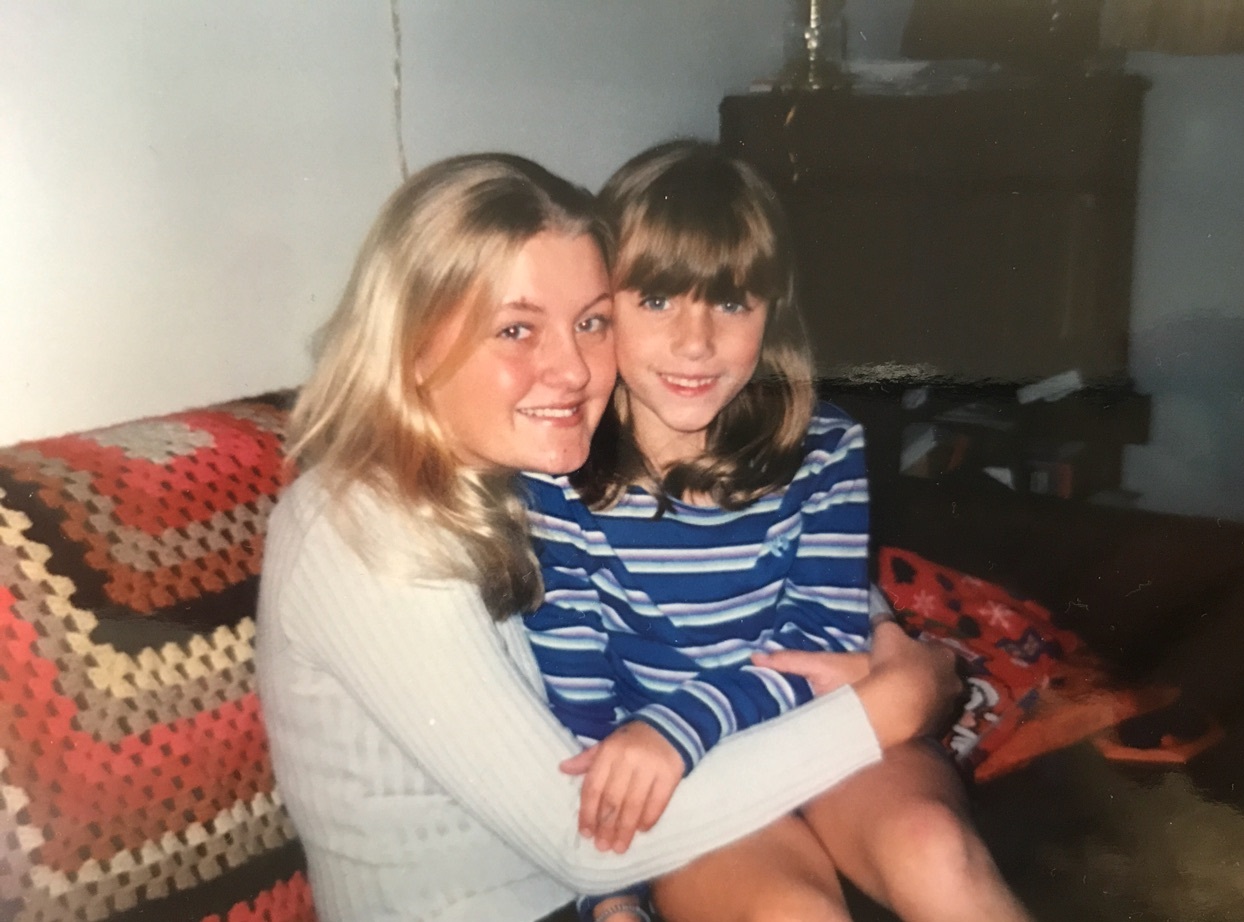 “The two au pairs I remember the best are Lina and Sandra, both from Sweden,” Carly says.

“Lina was incredibly creative. She would hand-draw children’s books for us – we still have them! She’d write these children’s stories that were make-believe, but based on our experiences. The main characters were three little girls, based on me and my two sisters.”

“I remember hearing the stories but imagining ourselves in their adventures.”

The family’s au pairs would always gift them something special at the end of their program. Some would write sentimental poems; others would create puzzles. Every single token would carry great meaning for the family. “I’m so glad these memories exist,” says Carly as she looks back on her experiences. “They’re gifts from big sisters who helped us grow and learn.”

The DeCostes credit their au pairs with helping the girls become creative thinkers. Their au pairs would encourage Carly, Sammy and Leah to explore and think outside the box. They’d help them read and write, as well as balance the girls’ passion for sports with more creative outlets.

And while every au pair brought a new perspective and array of traditions to the DeCoste household, it was the Swedish au pairs that made the biggest impact. They would help the girls make pannkakor – very thin, Swedish pancakes – at least once a month growing up. The girls loved them so much, they kept the recipe card and still use it today!

Perhaps the most memorable and heartwarming tradition for the DeCostes was the Swedish celebration of St. Lucia around Christmastime. The family still has home videos of the girls with their au pairs, dressed in the traditional white gowns and head wreaths, holding candles and singing Swedish carols. It became such a cornerstone of the DeCostes’ Christmas routine that all the Swedish au pairs in the neighborhood (10 or more every year!) would gather at their house to celebrate. Together they’d bake biscuits and cinnamon buns, and soak in the holiday spirit.

“We were able to become independent and well-adjusted children thanks to our au pairs,” says Carly. “Without them, we would’ve had inconsistent childcare outside our home while our parents were working – and I know that wasn’t what my mom and dad wanted for us.”

“I still remember them saying that they wanted ‘someone who can teach our kids about the world,’” she continues. “They got that and so much more with our au pairs.”
Today, the DeCoste family stays in close contact with their former au pairs. They’re extended members of the family – big sisters who will always have a place to stay in their home and an even more special place in their hearts. In fact, Carly and her family are talking about taking a family trip to Sweden next year to reconnect with some of their former au pairs – and to meet their families and children.

“My au pairs mean so much to me,” says Carly. “I wouldn’t be who I am today without them.” 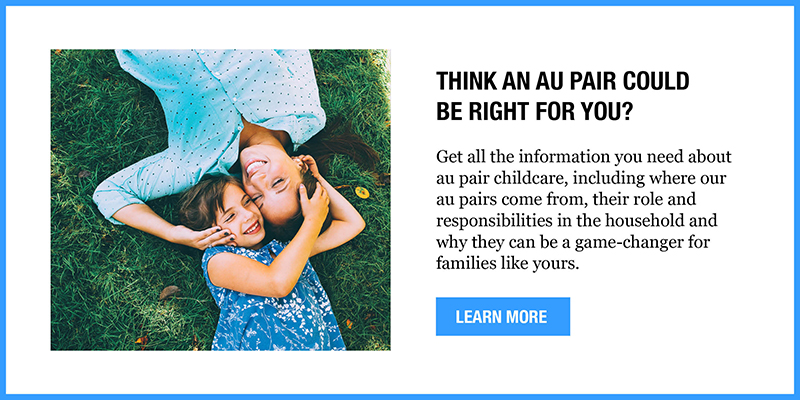