While her host dad is deployed, au pair Leonie is a “pillar of strength”

UPDATE TO ORIGINAL POST:
German au pair Leonie Hesse says she was “completely surprised” when her Local Childcare Consultant and Customer Relations Manger knocked on her host family’s door earlier this week to congratulate her on being chosen as Cultural Care’s 2015 Au Pair of the Year Award Winner. “Thank you so much! I am so excited,” she said of the news. Leonie received a travel voucher and GoPro camera to help make the most of her travel time here in the U.S. The greatest gift she says, however, “is the chance to spend more time in the U.S. with my host family”—Leonie and the Thompson family agreed to extend their time together for another 9 months just recently. Congrats to Leonie and to all other Au Pair of the Year finalists, state winners and nominees. If you haven’t already, read the original story about Leonie below.

Some Au Pair of the Year nominations highlight ordinary circumstances made extraordinary by au pairs who go the extra mile. Others tell the tale of au pairs helping families get through significant hardships and land back on their feet. This is one of those stories (tissues recommended).
Finalist:  Leonie Hesse, 18, from Germany
Host parents: Amy and Stephen Thompson
Host children: Aiden (14), Liam (11), Natalie (11)
Hometown: Lake Shore, MD
During the matching process, host parents Stephen and Amy Thompson let potential au pairs know that Stephen would be deployed to Afghanistan for the year. He had just spent much of the last year in training for the Coast Guard and would be leaving in June of 2014 for his first overseas mission. Their final match – German au pair Leonie Hesse – agreed to join their family and take on the responsibility of caring for the three Thompson children knowing Stephen would be away and Amy worked full-time. 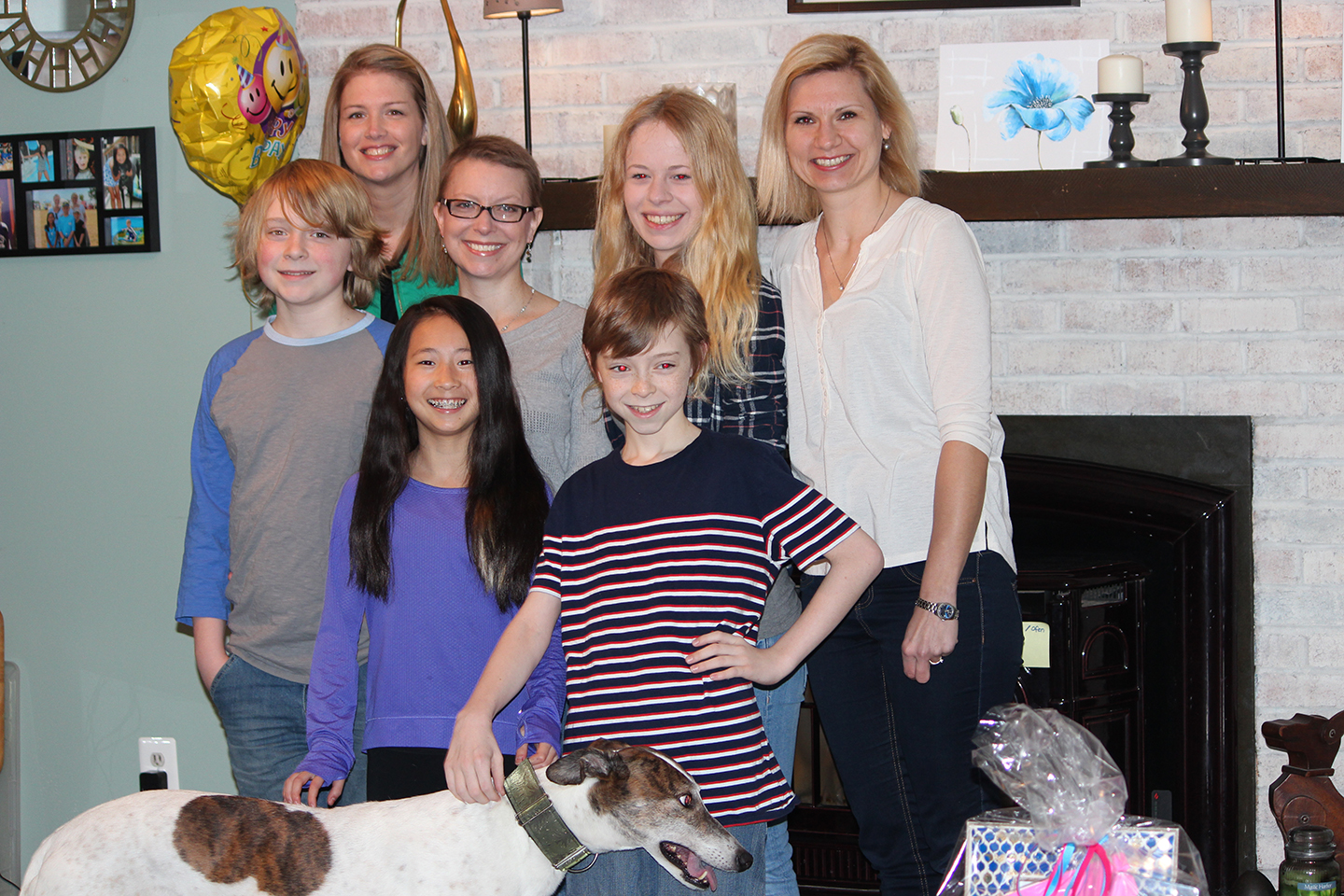 Just 10 days before Leonie was scheduled to travel to the U.S., Amy was diagnosed with breast cancer. Stephen had already departed for Afghanistan. Suddenly, Leonie had a much harder decision to make. Would she still be willing to be the family’s au pair knowing Amy would need multiple surgeries throughout the year and 18 weeks of chemotherapy right after Leonie’s arrival? The Thompson family had kept in touch with Leonie through Skype from the time they confirmed the match in April until Amy shared this devastating news. Amy says, “It felt like she was already a part of our family, and of course I hoped she would still come.”
Leonie was shocked to hear about her diagnosis but appreciated Amy’s openness about the situation. “She shared so much very personal information with me. It made me realize how much she still wanted me to come.” Leonie talked it over with her mom – a nurse – who was very supportive of her decision either way. “I’ve never known anyone with cancer so I didn’t know what to expect. But I decided I would go anyway.” Amy admits, “When Leonie called me back to say, ‘Don’t worry my bags are packed. I’m still coming,’ I just cried.”
In her nomination, Amy shared:

“While Stephen was away, Leonie stepped in whenever extended family members were not around and provided moral support for me and the children. She found ways to entertain and support the kids when I was not feeling my best. But most importantly, she ensured nothing changed in our kids’ routines. They have made every one of their soccer games, music lessons, concerts, and riding lessons. Leonie ensured their homework was done every night and helped them to study for exams. In fact, their grades have never been better. She is a pillar of strength and determination with a maturity that no one expected from an 18-year-old au pair. And she has managed all of this with an amazingly cheerful attitude.
We would have nominated her to be Au Pair of the Year because of her kindness, dedication and patience; but she filled a bigger role than just an au pair. She filled in for her host father who was deployed to Afghanistan and always volunteers to make sure the kids and house are taken care of without being asked. She embodies all of the values that Cultural Care requires of their au pairs and has exceeded our expectations. She has our highest recommendation to become the Au Pair of the Year.”

Leonie says she’s been able to do the same things any au pair would during her year, enjoying most weekends off to spend with other au pairs and have fun. And she’s admired how Amy has handled the cancer diagnosis and treatment. “Amy is so open about everything. She explains all of the treatments to her kids so they’re not scared. She had fun showing them her wig once she lost her hair. She keeps everything normal.”
The Thompson family is, of course, keeping their fingers crossed that Leonie decides to extend her year with them this summer. But Amy understands if she decides to go home, too. “We could not have asked for a better person, friend, and now family member to help us make it through this difficult year.”